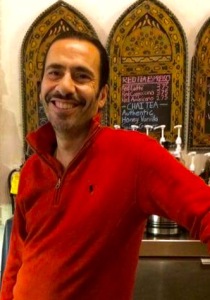 Saed Kakish, owner of Cahoots, loves coffee as much as historic places and antiques.  “I’ve tried to make sure that the shop reflects the history of the neighborhood and the friendly atmosphere of the area.  Since becoming the owner of the store in 1997, I’ve made sure to try to preserve what the costumers have loved best about this space and use their input to build a place everyone enjoys.  For instance, we had paint swatches on display in the shop for customers to choose what colors they’d like to see the walls painted.”

“People like to be a part of change when it happens, and so I think that when change is inevitable we should still try to include them as much as possible.”

Saed had been a longtime customer at Cahoots since its inception in 1994, drawn to the neighborhood originally because of “a great Mexican restaurant called La Corvina that had the best mole sauce!”  After becoming a regular at Cahoots, Saed was approached one day by the previous owner and asked if he wanted to take over the shop.  He was given three days to decide whether or not to accept ownership of Cahoots, otherwise it would be closed.  “I had absolutely no idea about coffee when I first bought the shop; I didn’t know how to brew it or anything!  I still decided to take the chance and since then have learned so much about the history of coffee itself and how to roast it well.”

The combination of good coffee and specialty drinks, an antique ambiance, and friendly service must be what draws customers in from near and far – some regulars come all the way from Hopkins on the weekends.  “That’s something new to the neighborhood; more and more people outside of the neighborhood have been attracted to the area because of the eclectic small shops and quirky businesses.”  Saed hopes that as the neighborhood changes, those who are a part of it continue to value the character that the older buildings bring to the area so that the area keeps its charm.  “When I take a break from being at Cahoots, my favorite pastime is to walk around the neighborhood and look at the variance in the homes in the area.  It’s fun to see how the lawns reflect the people who live here; some people raise chickens or grow different plants in their front yards and you can tell they all really care about where they live.  That’s special to this neighborhood and one of the reasons why I love being here.  It’s a great neighborhood, if I had to leave I’d really miss it.  My plan for now is to be here forever!”

You can find Saed’s welcoming smile and good humor behind the counter at Cahoots.

Dancing at the Crossroads By Saed Kakish, December 15, 2015
Published in Saint Paul Almanac 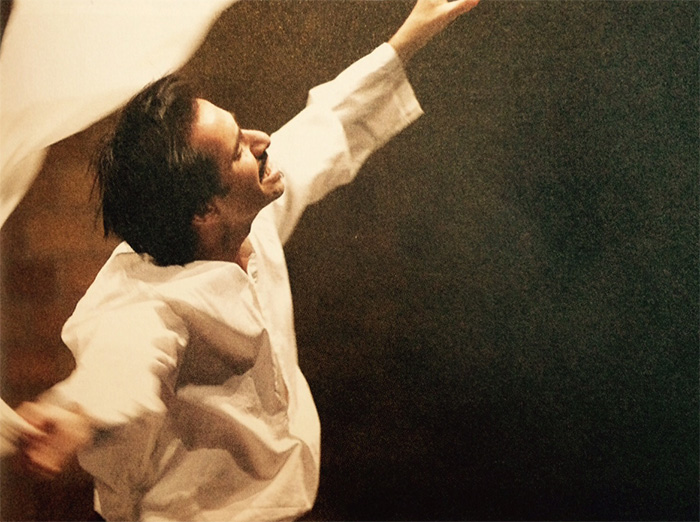 Saint Paul is my chosen home, the place where I feel most deeply that I belong. Now. It has not always been so.

In many ways my story is similar to countless American’s; we are, as President Kennedy wrote, “a nation of immigrants.” But when I arrived in Minnesota—my nine-year-old head swimming with tales of American opportunity, green cards already waiting—I felt extremely disoriented, almost as if I’d been kidnapped. My father, a dry grocer and merchant in Mafraq, Jordan, had come over two years earlier, working two jobs until he could bring the rest of us. Mafraq is a Bedouin town near the Syrian border; its name means crossroads, an apt description of its centrality on the road between Damascus and Amman. I had arrived, against my will, at an entirely different kind of crossroads.

We’d landed at O’Hare, my mother and the seven of us, and all the way to the Twin Cities, our earthly belongings strapped to the roof of my dad’s Dodge Colt, I felt everything I knew falling away in a swirl: not just familiar desert architecture and landscapes, the palm trees and camels, but all the tastes, smells, colors, and sounds of my young life, all slipping away as we headed northwest across the alien prairie. In the suburb that became my first American home, we were the only family of color for as far as my legs could walk in any direction. It was a difficult experience for a long time, breathing in and slowly taking up a new culture and home.

But when I went back to the Jordan I’d so ached for eleven years later, I found I was now a tourist in my country of origin, soaking up sites I’d never seen as a child. I couldn’t get enough—visiting Petra; splashing, wading, and bobbing in the Dead Sea; a day at the ancient Roman-ruin amphitheater in Jarash—but even then villagers called me “the American,” pointing out subtle differences in my dress and manner that marked me, even if I was unaware of them.

Innumerable nuances of culture and circumstances have carried me to this place where Minnesota’s crossroads city, its capital, feels so thoroughly my home. Saint Paul is urban while being historically interesting, with its distinctive buildings and neighborhoods, its growing diverse cultures living together while retaining important features of their countries of origin. I created my coffee shop where people who trace their ancestries back to Minnesota territorial days mingle and feel at home with those recently arriving from other places and histories. All contribute to my sense of belonging here. Now.

I’ve always done traditional Middle-Eastern dances at family celebrations, but an experience I had more than a decade ago, the first time I performed on stage, helped me recognize I’d been reborn in this new place. The performance began with six of us dancer-actors, each from a different homeland, laying flat on the stage, hidden under a large sheet of white fabric. After slow rhythmic stirrings, each of us emerged to tell his or her own story in that darkened auditorium. Something about that narrative-dance, a blend of traditional Arabic dance and my own invention, that movement from private act to public dialogue with a random audience, made me understand how much at home I was here in this new crossroads; now so many things had come together to make me belong.

Toward the end of our performance we sat under a tree on stage and drank coffee together, always a sign of community in Jordan; we ended with a joyous dance. My life in Saint Paul is not a joyous dance; no one’s is. But this crossroads is where I now belong.